Qumin works from the assumption that your paradigms are written in phonemic notation. The phonological segments file provides a list of phonemes and their decomposition into distinctive features. This file is first used to segment the paradigms into sequences of phonemes (rather than sequences of characters). Then, the distinctive features are used to recognize phonological similarity and natural classes when creating and handling alternation patterns.

To create a new segments file, the best is usually to refer to an authoritative description, and adapt it to the needs of the specific dataset. In the absence of such a description, I suggest to make use of Bruce Hayes’ spreadsheet as a starting point (he writes +, - and 0 for our 1,0 and -1).

The segments file is also written in wide format, with each row describing a phoneme. The first column gives phonemes as they are written in the paradigms file. Each column represents a distinctive feature. Here is an example with just 10 rows of the segments table for French verbs:

The file is encoded in utf-8 and can be either a csv table (preferred) or a tabulation separated table (tsv).

Since the forms in the paradigms are not segmented into phonemes, the phonological segments file is used to segment them.

It is possible to specify phonemes which are more than one character long, for example using combining characters, or for diphthongs and affricates. Be careful of using the same notation as in your paradigms. For example, you can not use “a” + combining tilde in one, and the precomposed “ã” in the other file, as the program would not recognize them as the same thing. You should however be certain that there is no segmentation ambiguity. If you have sequences such as “ABC” which should be segmented “AB.C” in some contexts and “A.BC” in some other contexts, you need to change the notation in the paradigms file so that it is not ambiguous, for example by writing “A͡BC” in the first case and “AB͡C” in the second case. You would then have separate rows for “A”, “A͡B”, “C” and “B͡C” in the segments file.

Internally, the program will use arbitrary aliases which are 1 character long to replace longer phonemes – this substitution will be reversed in the output. While this usually works without your intervention, you can provide your own aliases if you want to preserve some readability in debug logs. This is done by adding a column “ALIAS” right after the fist column, which holds 1-char aliases. This example shows a few rows for the segment files of navajo:

If you have many multi-character phonemes, you may get the following error:

The solution is to add an alias for this character, and maybe a few others. To find aliases which vaguely resemble the proper symbols, this table of unicode characters organized by letter are often useful.

Distinctive features are usually considered to be bivalent: they can be either positive ([+nasal]) or negative ([-nasal]). In the Segments file, positive values are written by the number 1, and negative values by the number 0. Some features do not apply at all to some phonemes, for example consonants are neither [+round] nor [-round]. This can be written either by -1, or by leaving the cell empty. While the first is more explicit, leaving the cell empty makes the tables more readable at a glance. The same strategy is used for features which are privative, as for example [CORONAL]: there is no class of segments which are [-coronal], so we can write either 1 or -1 in the corresponding column, not using 0.

While 1, 0 and -1 (or nothing) are the values that make the most sense, any numeric values are technically allowed, for example [-back], [+back] and [++back] could be expressed by writing 0, 1, and 2 in the “back” column. I do not recommend doing this.

When writing segments file, it is important to be careful of the naturality of natural classes, as Qumin will take them at face value. For example, using the same [±high] feature for both vowels and consonants will result in a natural class of all the [+high] segments, and one for all the [-high] segments. Sometimes, it is better to duplicate some columns to avoid generating unfounded classes.

Frisch (1996) argues that monovalent features (using only -1 and 1) are to be preferred to bivalent features, as the latter implicitly generate natural classes for the complement features ([-coronal]), which is not always desirable. In Qumin, both monovalent and bivalent features are accepted. Internally, the program will expand all 1 and 0 into + and - values. As an example, take this table which classifies the three vowels /a/, /i/ and /u/:

Internally, Qumin will construct the following table, which looks almost identical because we used monovalued features:

This will then result in the following natural class hierarchy: 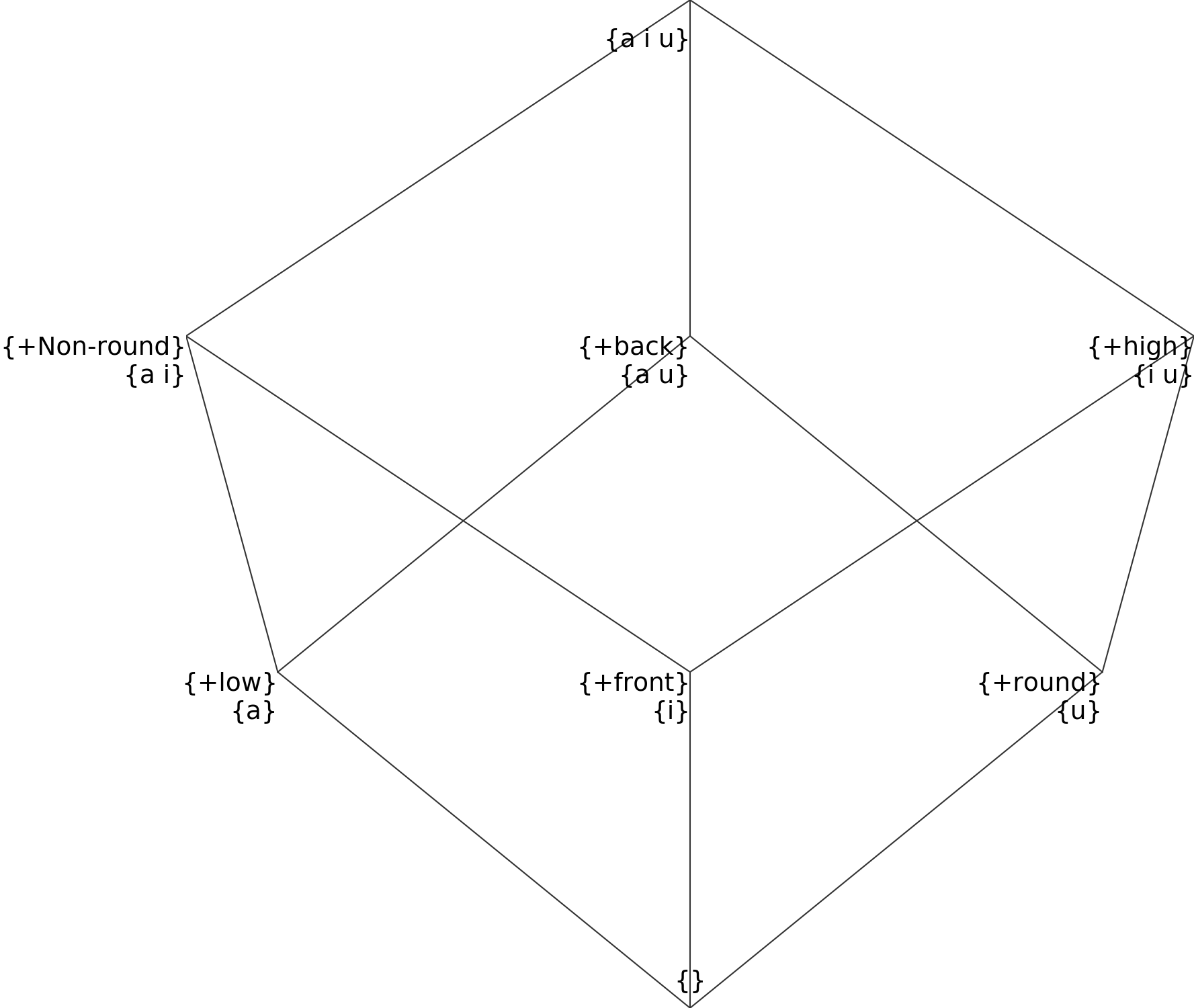 To visualize natural class hierarchies declared by segment files, you can use FeatureViz.

The same thing can be achieved with less columns using binary features:

Internally, these will be expanded to:

Which is the same thing as previously, with different names. The class hierarchy is also very similar: 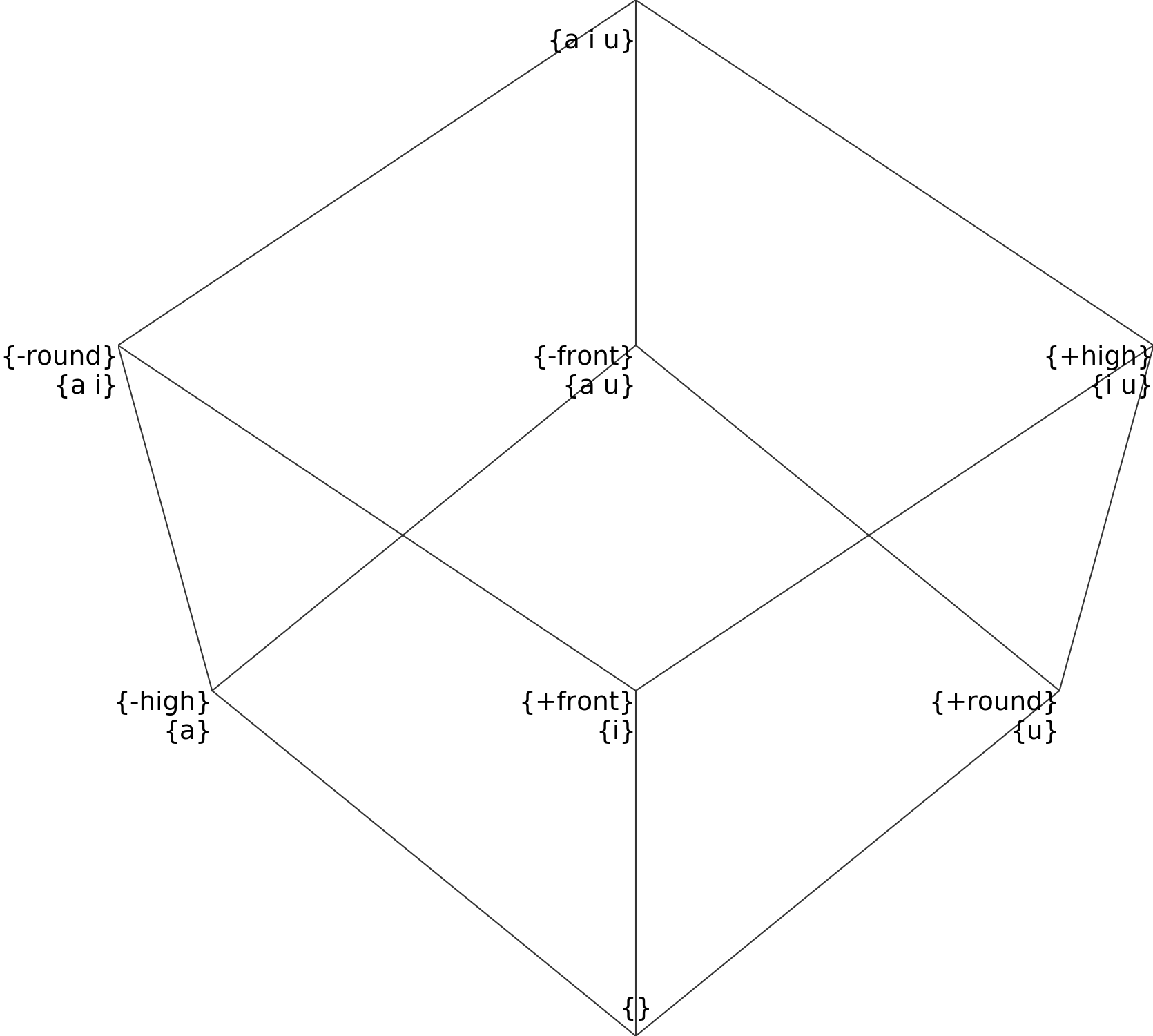 2.4.2. Warning, some of the segments aren’t actual leaves¶

The following error occurs when the table is well formed, but specifies a natural class hierarchy which is not usable by Qumin: 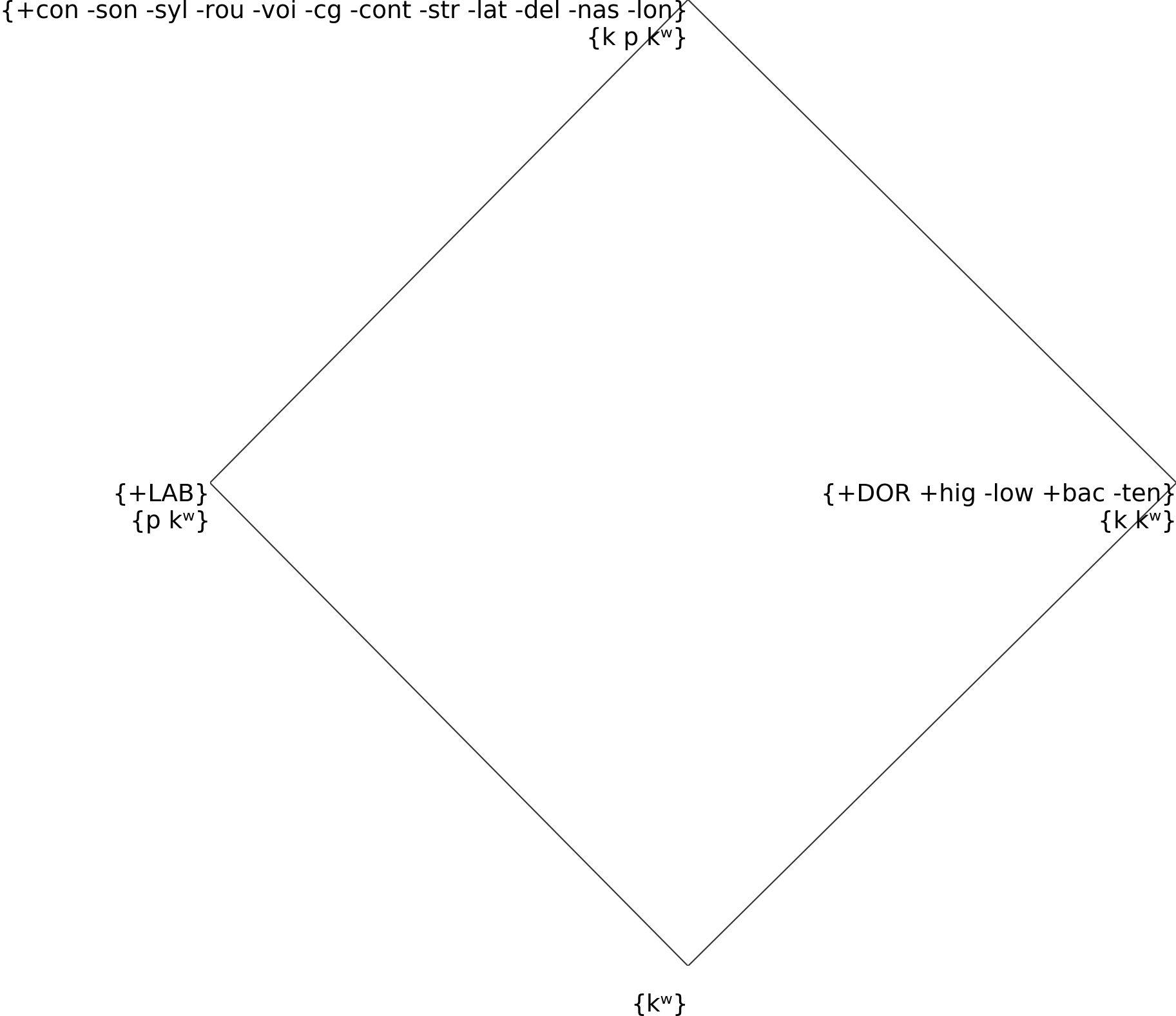 In this structure, it is impossible to distinguish the natural classes [p-kʷ] and [k-kʷ] from the respective ponemes /p/ and /k/. Instead, we want them to be one level lower. If we ignore the bottom node, this means that they should be leaves of the hierarchy.

The solution is to ensure that both /p/ and /k/ have at least one feature divergent from [kʷ]. Usually, kʷ is marked as [+round], but in the above it is mistakenly written [-round]. Correcting this definitions yields the following structure, and solves the error: 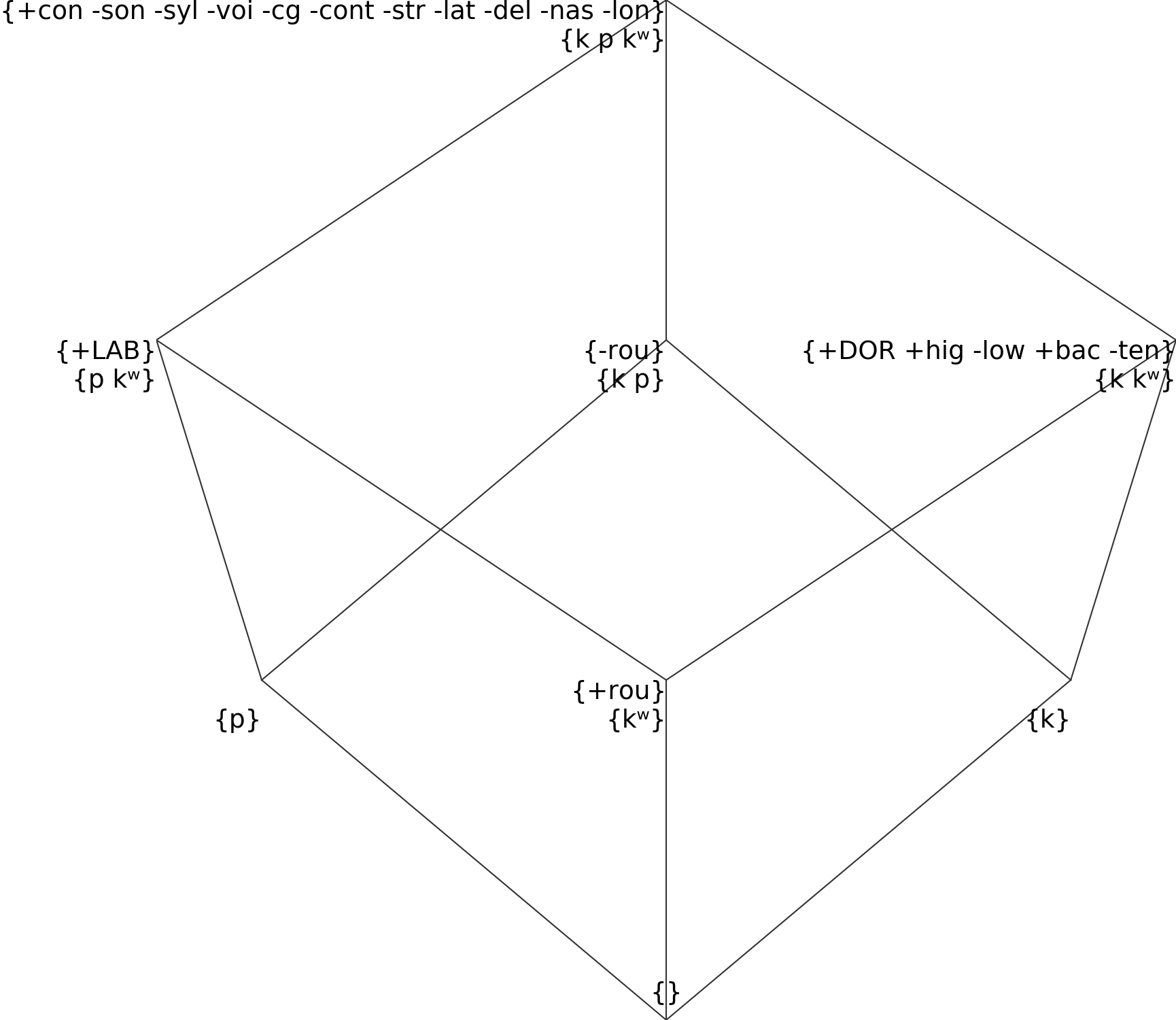 While having a segment be higher than another in the hierarchy is forbidden, it is possible to declare two segments with the exact same features. This is useful if you want to neutralize some oppositions, and ignore some details in the data.

Leading to this complex hierarchy: 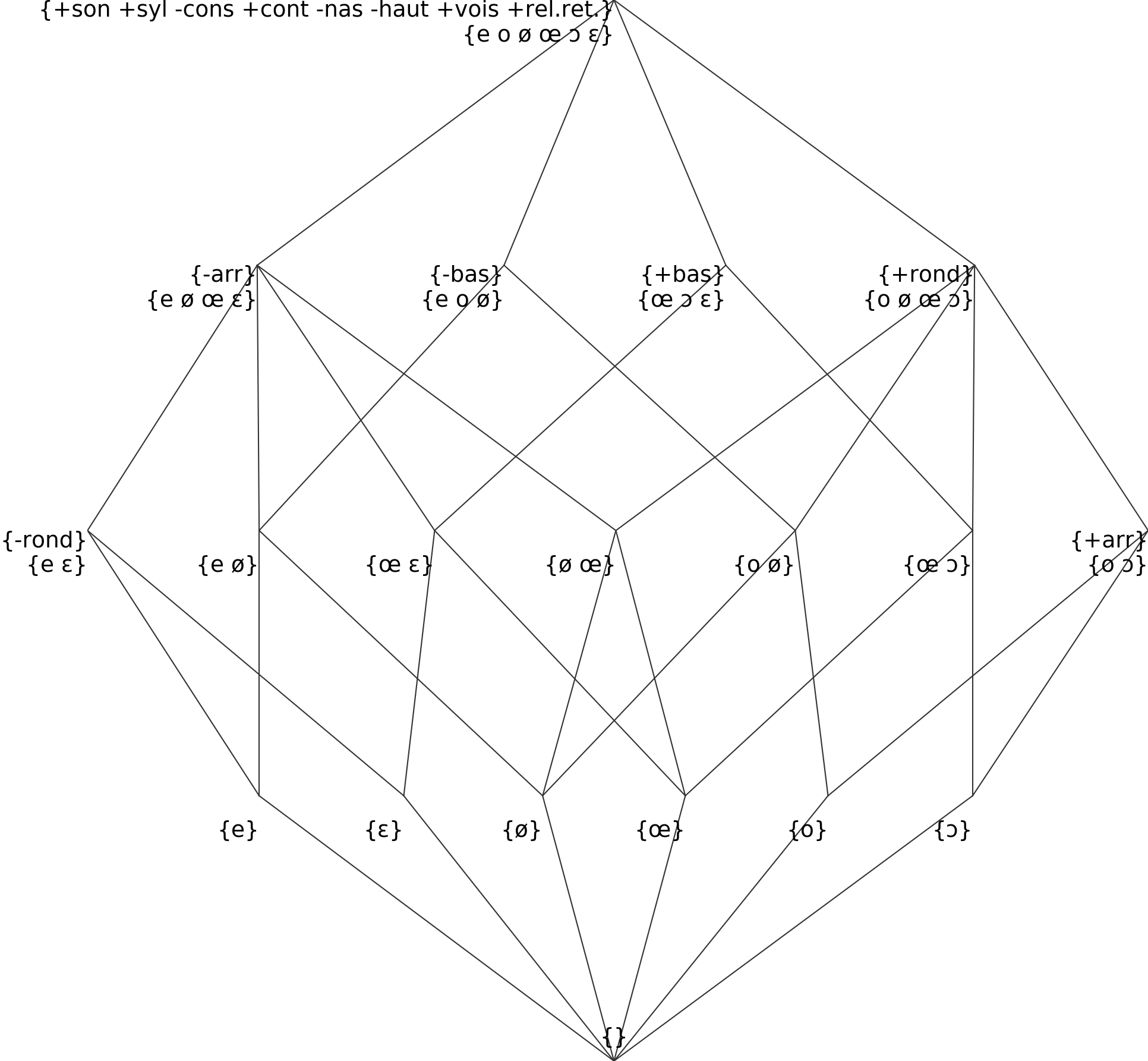 Due to regional variations, the French Vlexique sometimes neutralizes this oppositions, and writes E, Ø and O to underspecify the value of the vowels. The solution is to neutralize entirely the [±low] distinction for these vowels, writing repeated rows for E, e, ɛ, etc:

Internally, Qumin will replace all of these identical characters by a single unified one (the first in the file). The simplified structure becomes: 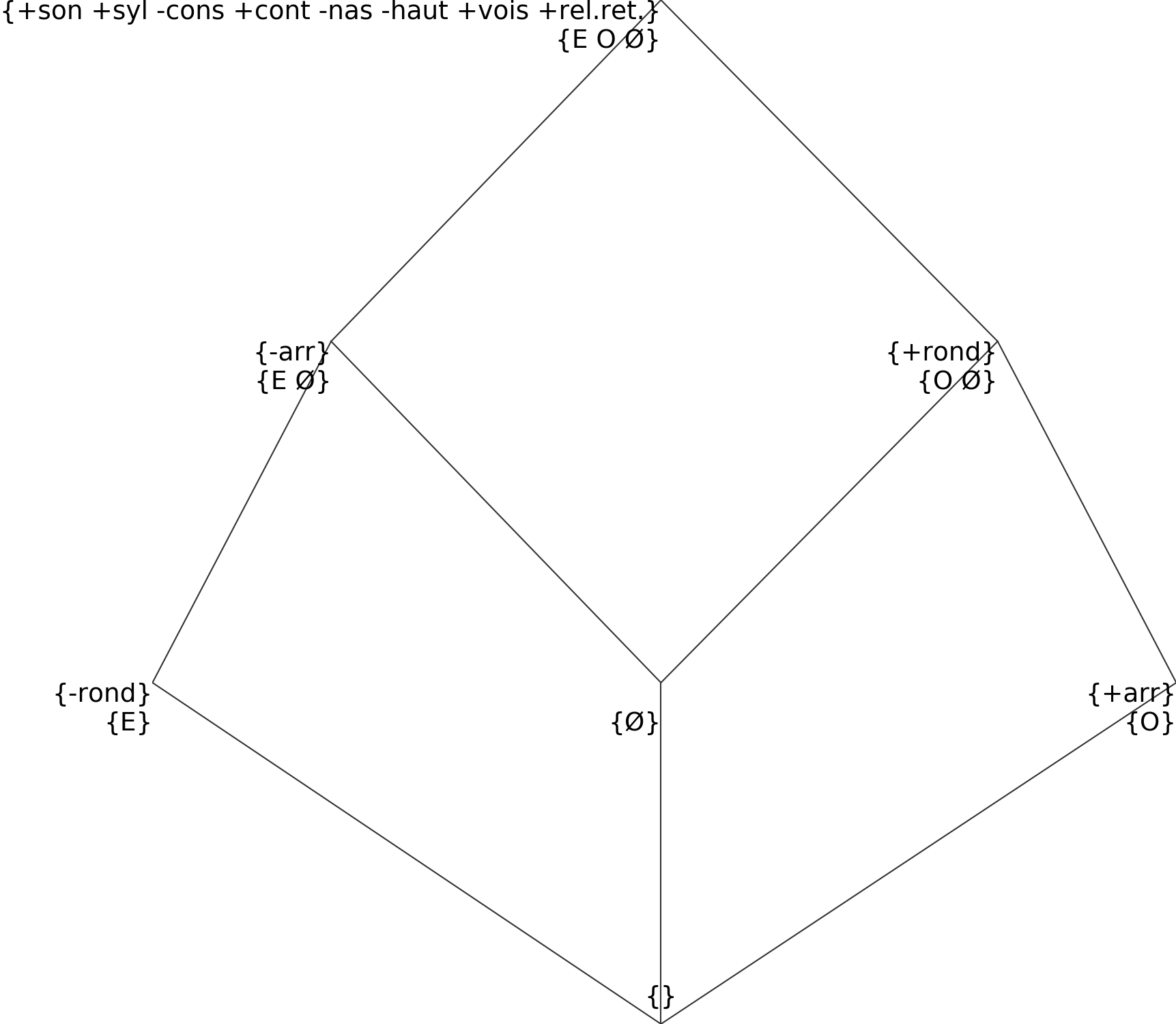 Rather than using many-valued features, it is often preferrable to use a few monovalent or bivalent features to create a scale. As an example, here is a possible (bad) implementation for tones, which uses a single feature “Tone”.

It results in this natural class hierarchy: 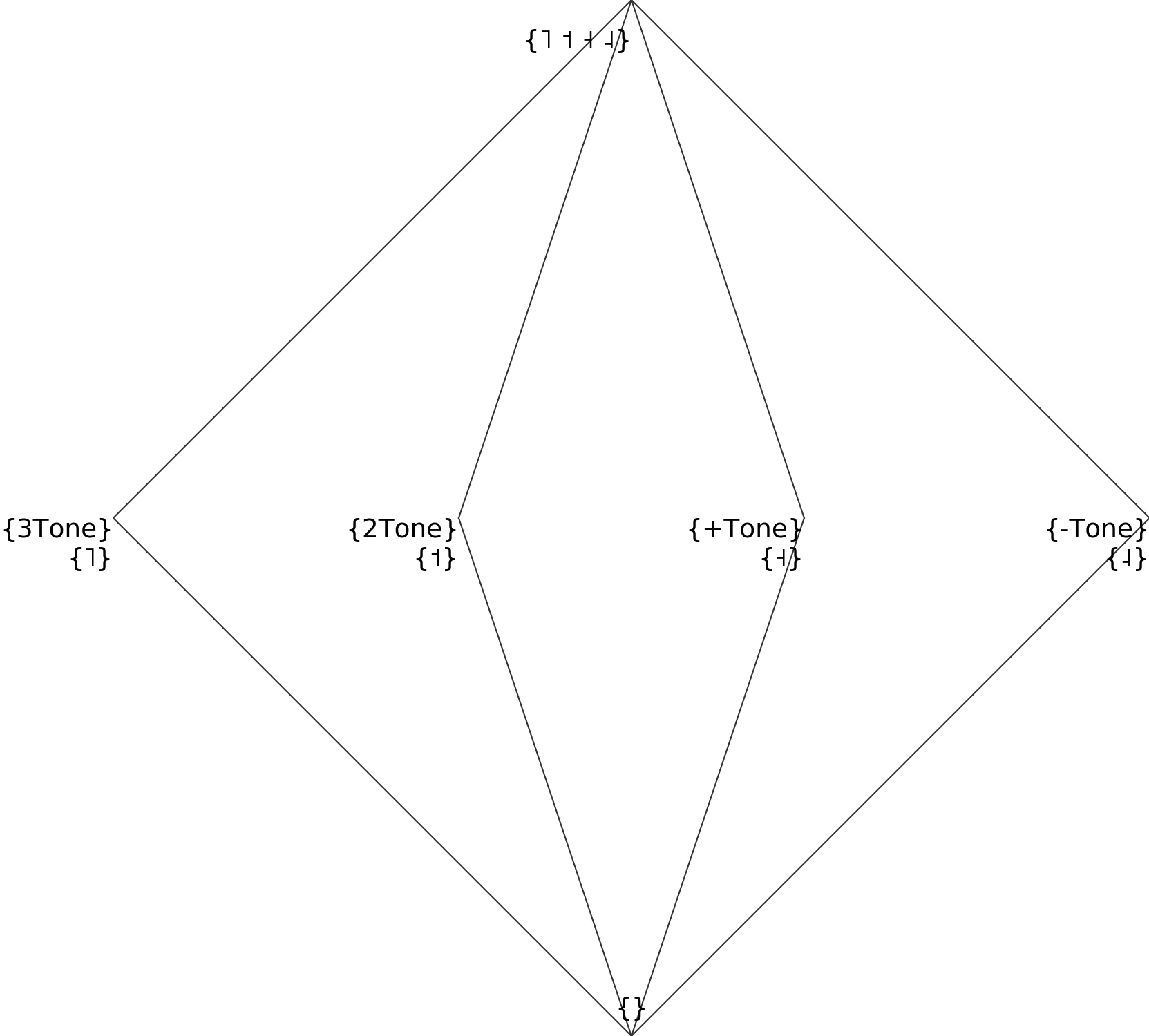 While such a file is allowed, it results in the tones having nothing in common. If some morpho-phonological alternations selects both high and mid tones, we will miss that generalization.

To express a scale, a simple solution is to create one less feature than there are segments (here four tones lead to three scale features), then fill in the upper diagonal with 1 and the lower diagonal with 0 (or the opposite). For example:

It will result in the natural classes below: 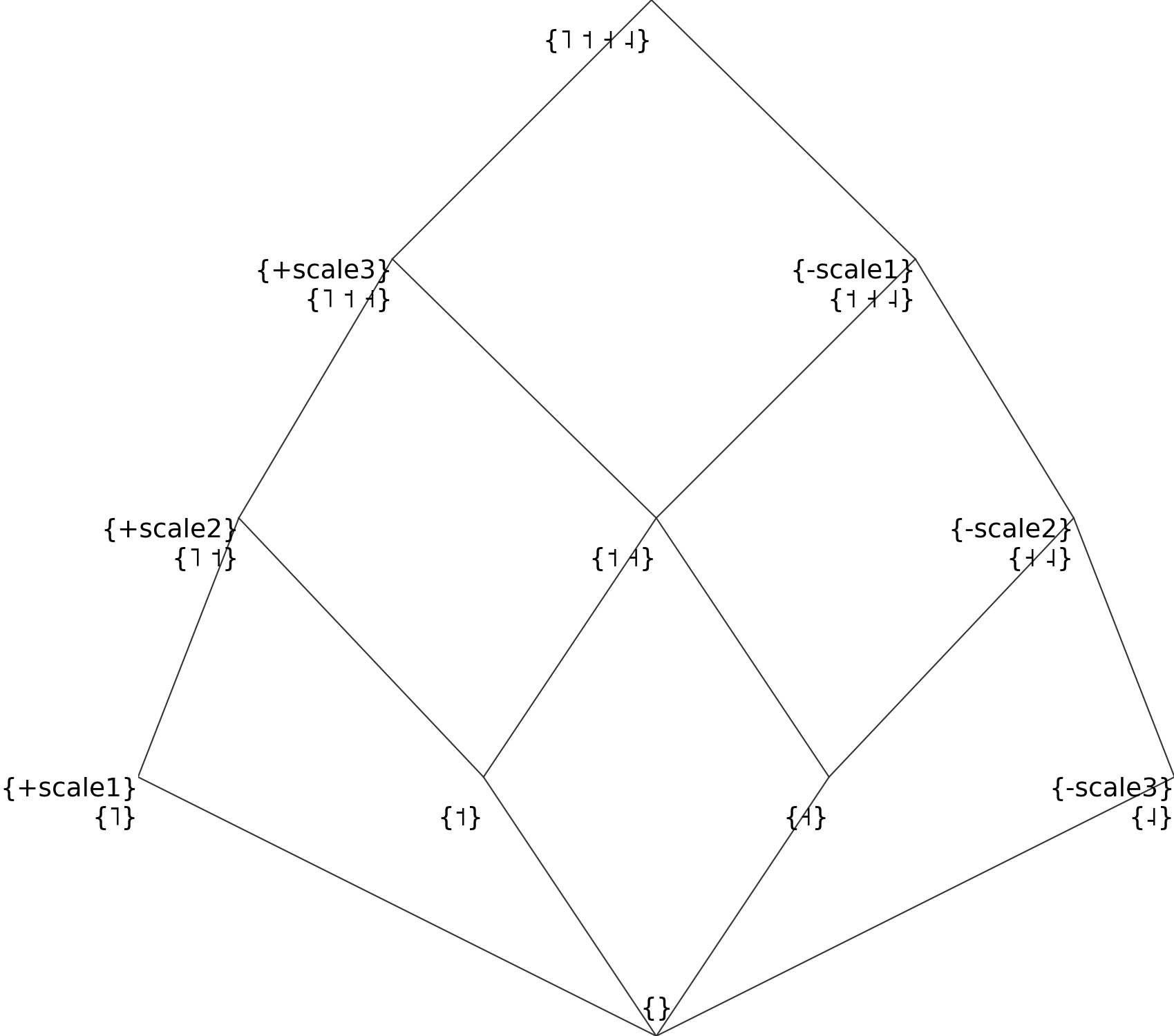 Since this is not very readable, we can re-write the same thing in a more readable way using a combination of binary and monovalent features:

Which leads to the same structure: 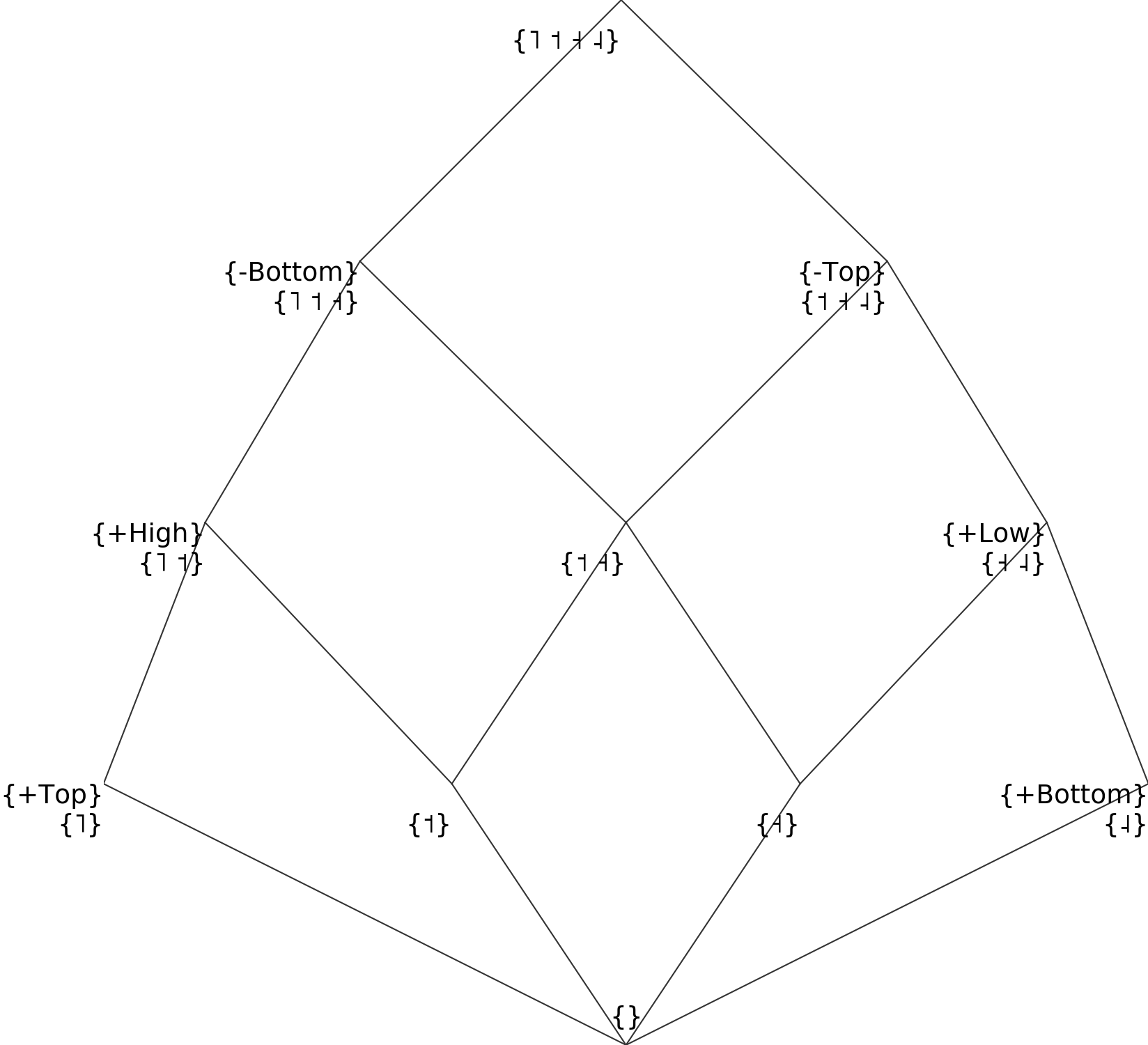 When implementing tones, I recommend to mark them all as [-segmental] to ensure that they share a common class, and to write all other features as [+segmental].

Diphthongs are not usually decomposed using distinctive features, as they are complex sequences (see this question on the Linguist List). However, if diphthongs alternate with simple vowels in your data, adding diphthongs in the list of phonological segments can allow Qumin to capture better generalizations. The strategy I have employed so far is the following:

This is a small example for a few English diphthongs:

Which leads to the following classes: 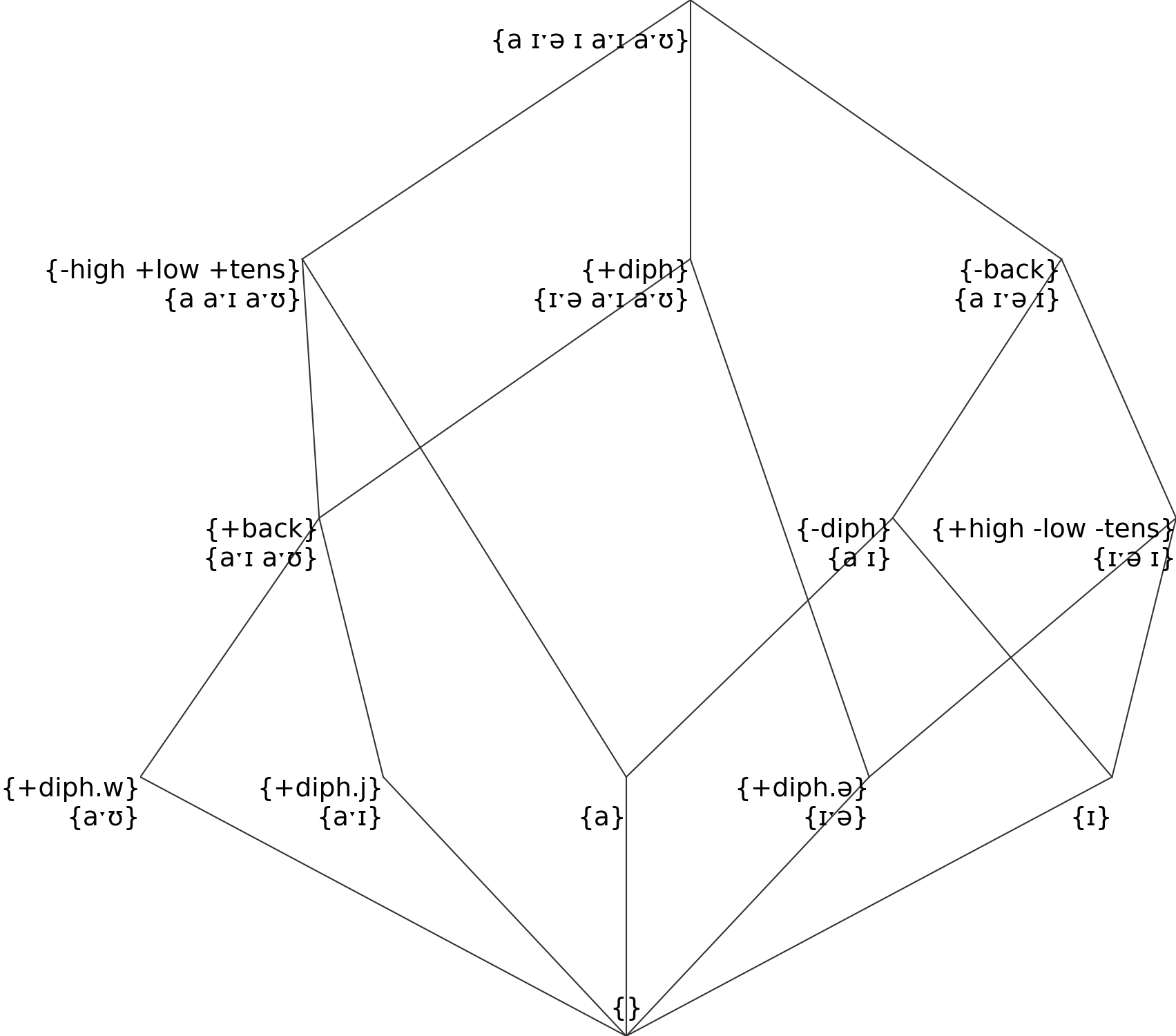